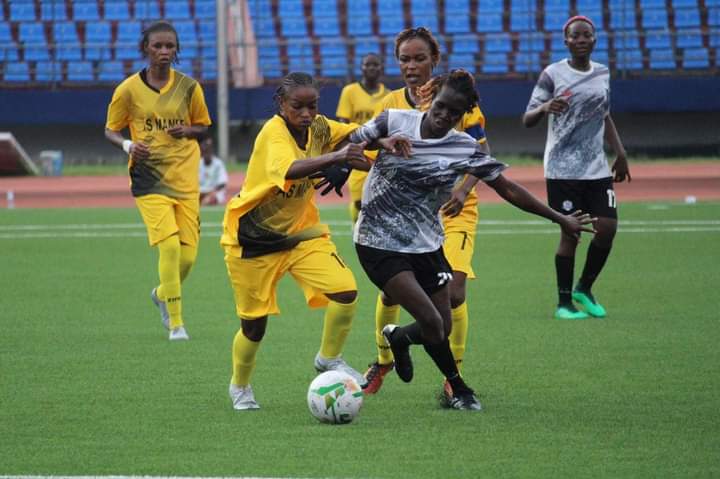 The stubborn visitors put up a late fight to share the spoils with their hosts at the Samuel Kanyon Doe Stadium in Paynesville.

Hosts Determine Girls took the lead through Kantie Sayee in the 82nd minute after a prolonged period of goalless run in the crucial encounter, but the uncompromising visitors quickly cancelled that lead with an electrifying equalizing goal from Fatoumata Doumbia just on the stroke of the 90th minute.

Home side Determine Girls were unable to withstand pressure from their Malian counterparts despite efforts to uphold the 1-0 lead in order to ensure they get a perfect start to the tournament and to keep their hope of finding a place at the CAF Women’s Champions League alive.

Both teams headed into the match in need of a win, but it was hosts Determine Girls who appear to have the load on their shoulders as they were seeking to revenge a heavy 4-0 defeat suffered to the Malians in the maiden edition of the competition last year.

On the other hand, AS Mandé who are defending champions of the WAFU Zone A came with their heads held high to defend the title won las year.

Determine Girls who were more offensive from the start of the match had couple of clear-cut chances in the first period, but Guinea international Mabinty Camara and eventual opening goal scorer Kantie Sayee lavished those chances.

For their part, the best chance for the Malians came five minutes before the break, but captain Fatoumata Diarra header traveled wide over the crossbar bringing no trouble to the Liberian champions.

Sayee could have given Determine Girls the lead earlier than expected before recess after squandering two clear chances courtesy of phenomenal saves from AS Mandé’s goalkeeper Sadio Sow which saw both sides heading to the break all squared at nil-nil.

Hosts Determine Girls got the game running in the final half, but the resilient visitors kept their defense on the alert to contain the pressure.

Ruth Wesseh had an early miss five minutes later in the second-half with a long range strike that flew wide off target.

Mabinty Camara had a another chance in the 58th minute, but the shot went over the net instead of in the net.

Two minutes later, Nana Diarra got a through ball from her team-mate Aminata Dia –she too just send that miles away from target.

After several attempts, Determine Girls finally broke the deadlock as Sayee pounced on a rebound after AS Mandé’s goalie had got a save of Bountou Sylla’s close-range strike eight minutes before time.

Notwithstanding, the stubborn visitors fought till the last minute and their final counterattack paid off well for them with Fatoumata Doumbia scoring a breathtaking equalizer to rescue a point for the Malian giants of evening.

AS Mandé are up next against Senegalese side Union Sportive de Parcelles Assainies (USPA for short) in their final match of the zone on Friday, 19 August.

The zone will be rounded up with a clash between the Liberian champions and USPA on Sunday, 21 August at the SKD Stadium.