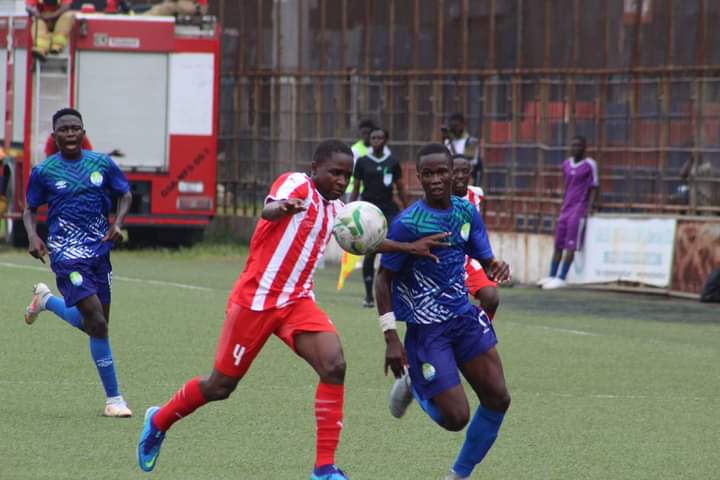 The 2022 WAFU U15 Nations Cup hosts came from a goal down to conquer their Sierra Leonean counterparts at the ATS on Saturday morning.

Sierra Leone took the advantage after few minutes in the first-half with starlet Osman Mansaray scoring an early minute opener to sent the visitors ahead.

But that lead was quickly responded to in the sixth minute with an equalizing goal from Ezekiel Varney making the score one apiece as both teams went to the break unseparated.

Liberia came from the break being more aggressive and they took the lead for the first time in the match with a delicious goal from Emmanuel Flomo less than two minutes in the latter period.

Being fully cognizant that it was their last game of the tournament, Sierra Leone could not afford to loose the match; they fought to regain control of game, but the hosts refused to settle for anything less than a win.

Things tend to get tough for the Lone Star following Abednego Gborlee’s expulsion from the match after being adjudged guilty by the center referee for a ruthless foul resulting to his second yellow with 16 minutes remaining on the matchday clock.

In spite of being a man down, Coach Ansumana Keita’s boys kept fighting to the last minute to ensure that the result went their way.

The Liberians were left with no worries after Sierra Leone’s Mohammed Kamara was sent-off; he too was dismissed after obtaining his second yellow for a bookable offence.

Today’s result means Sierra Leone are out of the 2022 WAFU Zone-A Men’s U15 Nations Cup finals leaving the race for the crown between hosts Liberia and defending champions Senegal.

Following the 2-1 victory, Liberia will now face Senegal in the concluding fixture of the 2022 WAFU Men’s U15 Nations Cup at the Antoinette Tubman Stadium in Monrovia at 9:00 Am on Sunday, 21 August 2022.

The winners from this encounter will be crowned champions of the 2022 WAFUA-A U15 championship, but a draw of any score will see the young Lions of Teranga retaining their crown.

Senegal currently sit at the summit of the group compromising three nations and they have a goal advantage ahead of the hosts despite being leveled on 3-point each.

Senegal defeated Sierra Leone 3-1 in the first match of the competition yesterday following the withdrawal of Mauritania.