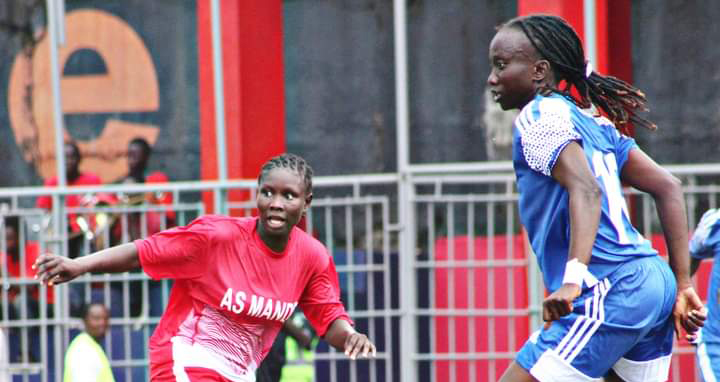 It was an entertaining and crucial match at the Antoinette Tubman Stadium in Monrovia on Friday evening, 19 August as both teams displayed an epic performance with their masterclass exchanges.

The game started on a very slow pace with both sides being skeptical not to concede any early goal in such crucial clash.

However, it was Malian giants AS Mandé who started making early attempts to break the deadlock with few chances coming their way in the opening quarter of first-half, but captain Fatoumata Diarra and Aissata Keita will blame themselves for throwing away those chances.

Keita could have sent the Malians in front in the 10th minute, but her shot went straight in the bosom of goalkeeper Adji Ndiaye who was well positioned between the sticks.

Meanwhile, the Senegalese champions had their own fair shared of goal chances before the interval, but Pascaline Bassené shots were not weighty enough to beat pass AS Mandé’s goalie.

Second-half was more electrifying, but it was the Senegalese that saw plenty of chances coming their way; unfortunately, they were wasteful in attacks.

USPA thought they had broken the deadlock in the 70th minute when Bineta Seck brilliantly sneaked through the Malians defense, but goalkeeper Sadia Sow who was well on top of her game displayed a good reflex with double save to deny the Senegalese.

The Senegalese side still tried to impose a late winner but Sow had another phenomenon save after punching away a Maremé Babou’s free-kick five minutes before full-time.

AS Mandé on the other hand mounted a late minute pressure, but the Senegalese had a well fortified defense which was almost completely impenetrable.

The Malians who were defending their title having emerged as champions of zone in the maiden edition of the qualifiers last year missed out a late strike, this time, Aissata Keita shot from a distance resulted to woodwork thereby ending the match on deadlock.

The outcome means AS Mandé hope of making it to the 2022 African Women’s Champions League finals for the second time is almost over despite currently being seated at the summit of the table – they have exhausted all their matches in the qualifying series.

USPA and Liberia’s Determine Girls will now face-off on Sunday at the same venue in a match that will definitely decide which team will represent the zone in the continental clubs competition for women.

Senegal’s USPA will need a compulsory win to secure the one slot available for the WAFU Zone-A in the Women’s Champions League.

As for the Liberian champions, they will need a draw with goal produced if they must book their flight to the final tournament in Morocco later this year.

As it stands, a goalless draw between both sides on Sunday will see the Zone’s winner being decided on a fair play basis between AS Mandé and the hosts, Determine Girls.

This indicates that both USPA and Determine Girls have their qualification in their own hands when they meet each other on at 4pm local time on Sunday.